Ha! I bet you all thought I would never blog again?

I went to Newport today, which is about a 40 minute bus ride from Cardiff. Hunky Dory is a short uphill walk from the Newport bus station and despite the name and pic of the Bowie album cover on their menu, it has little to do with Bowie. They were playing Elvis Costello and Tom Waits while I was there.

Can't remember what the soup was exactly. Had coriander and lentils in it.


I wasn't expecting something that looked like this when I ordered the mushroom pot pie. Mushroom and gravy with a rectangle of puff pastry. I don't know if it really meets the requirements for a pot pie.


The cherry cake was my second option as they had run out of gingerbread cake. It was nothing special and a little bit dry.

Meal cost about £9 all up. It's decent enough food and I'll give their burgers a try next time I'm in Newport.

Trip was totally worth it after I found a spiritualist church a few doors down from the cafe. Didn't think they still existed. 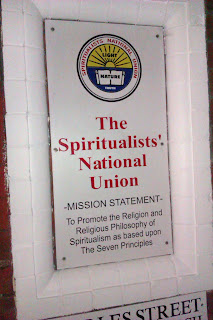 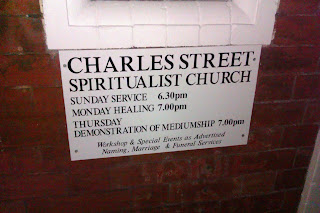 Welcome to the breakfasts of my life (in the UK)

Regular readers of my blog would be clueless to the fact that I've recently moved overseas. For the next year Cardiff, Wales is my home and I intend to eat every vegan dish available in the city while I'm here. Tales of those meals are for another time.

Before arriving in Cardiff I spent some time in Manchester and Liverpool meeting up with friends and soaking in the vegan/vegan friendly culture. 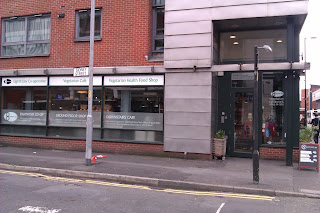 8th day is a co-operative that runs a health food store and cafe. It is also the first place I saw hemp milk being legally sold for human consumption. A fine vegan breakfast is available at 8th day co-op in Manchester. Toast, beans, mushrooms, tomatoes, sausages and some battered tofu triangles. There is really nothing to complain about with this other than that there should be more everything. It worked out to about £5 including a freshly squeezed juice. 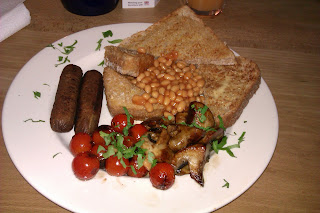 This place was a very short walk from my hostel in Liverpool and it was well worth the walk. Their scrambled tofu doesn't have much going for it when compared to what you get in Melbourne but brown sauce can make up for that. Solid breakfast that comes with a coffee for only £4.50. 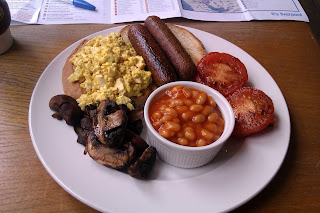 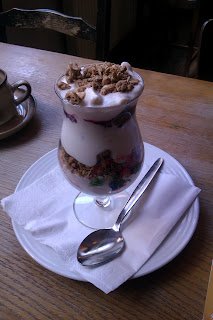 I had both of these every day while I was in town. They also have sandwiches and a pretty solid dinner menu. It also has a very well-stocked bar (they had coopers!) and is a live music venue too.
Posted by Veganator at 9:19 AM No comments:

I think it was vegansaurus that first introduced me to meat cakes. Knowing that I was about to reach a major milestone in my life, I needed to mark the occasion with something out of the ordinary. It was to be  meat cake. I based the recipe on a fresh new stomach's thanksgiving cake. I used just over 1.5kg of tofu to make a multi-layered tofurkey cake with mashed potato icing. I made it GF too by using tamari instead of soy sauce and topped it with massel gravy just before serving. 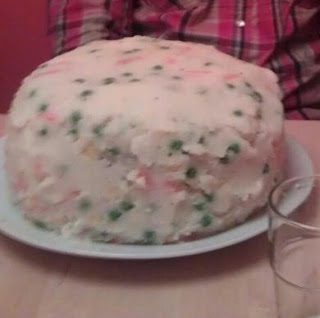 Thanks to K for the pics and to the wonderful folks at Las Vegan for accommodating my peculiar cake eating ways so readily.
Posted by Veganator at 12:11 AM No comments:

Many think Greensborough is devoid of any redeeming qualities. In many ways they are right, but not in the case of holey moley! Gourmet coffee cafe. One of the owners is vegan and they have a few funky pies, bagels, sandwiches and fancy shakes available to the hungry vegan. I've been a few times and usually go for the falafel bagel and a choc-peanut butter shake. 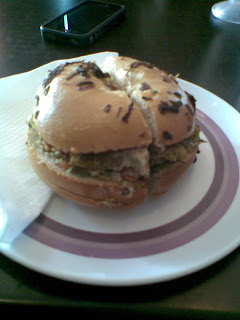 It's only a couple of minutes walk from Greensy savers too.

The vegan easy market day, held a few weeks ago, had many great speakers and demos, but only one was deemed worthy of being uploaded by the vegan easy challenge crew. ;) Check it out here.
Posted by Veganator at 4:46 PM No comments:

We'll have naan of that.

With my yoghurt making now perfected, I scoured the internet for recipes that required plain yoghurt and came across this naan bread recipe. The prep is easy. The only problem I had was shaping the loaves, as can be seen in the pic. I've been out of blogging action for a while due to being busy and not being bothered to blog.

After discovering that inner health plus dairy free is vegan, and snatching up one of the yoghurt makers that ALDI was selling a while ago, I set myself on the task of creating the finest plain vegan yoghurt my suburb had ever seen.

I searched a few sites looking for advice on how to make it and ended up with this thread at veganfitness.net and Bryanna Clark Grogan's page. 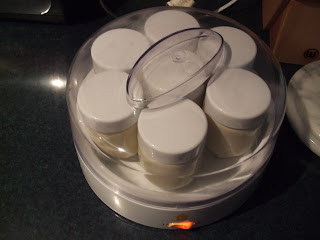 It won't be quite like commercial yoghurt, as most of them use thickeners, but it's good enough for me. 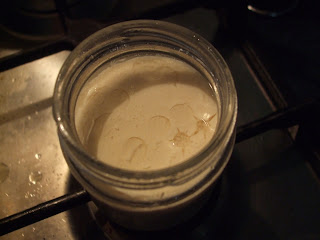 * Prizes for knowing where the quote in the post title comes from. First person to answer will receive a firm handshake and/or a pat on the back the next time I see them. Good luck.
Posted by Veganator at 10:55 PM 4 comments:

My long involvement with the vegan strength crew has led me down a path of never ending experimentation with health supplements. My natural tight-fistedness also kept me on the lookout for cheap suppliers and my inner geek saved me (most of the time) from falling victim to the many dodgy claims of the supplement companies. I thought it was about time to share some of my findings rather than just keep it to myself and a few friends. The first installment will be about protein supplements.

Let me get my basic recommendations out of the way.

My first recommendation is to always go for unflavoured protein and to buy in bulk. The crappy little tubs of soy protein you can buy at your local supermarket are a total rip-off as are the pricey supps which are mostly sugar, oil, "super foods" and other fillers with very little protein per serving not to mention very few servings per container.

Second, don't fall for the marketing hype. For the most part your body doesn't care if the form of the amino acids you consume is raw, processed, "alkalising", "natural" or whatever other buzz words are popular at the moment. It's just another way for companies to try to get more money out of you. If you are concerned about the amino acid profile of certain proteins you can always buy two types and combine them (pea or soy and rice is a common blend) or just get nitrofusion if you are too lazy for that ;) .

Protein is often lacking in the diets of people who eat no protein. Thankfully this is not the case for people who don't make poor food choices ;) . Not too long ago there was little choice available to the vegan muscle man/woman wanting to add a quick and easy protein boost to their diet. Soy and rice protein were the only local options. In recent years it has expanded greatly and there is no reason why a vegan couldn't be knocking back 200+gms of protein a day if they wanted to, which could theoretically be done without supplements if you tweak your diet enough, but why would you bother? ;)

I initially started out buying the NHS soy protein (around $95 for 3 kg) from Evelyn Faye Nutrition in the city and it is still pretty good value, gets the job done and doesn't taste too bad.

The cheapest source of protein powder in Australia, that I have found, is bulk nutrients' rice protein isolate which can be as cheap as $22 per kg if you buy in bulk. I can't comment on the taste as I've never tried it.

My go to protein powder at the moment, mainly for convenience as there are a few cheaper options. The best place to get this is from the Uproar store as the markup is minuscule and the profits go towards actually helping animals and promoting veganism.

Some people think pea protein is revolting, but I don't have a problem drinking it with plain water. I think this might be due to something like the brussels sprouts phenomenon where many people are disgusted by them yet I find them delicious. I think I'm a non-responder to pea protein's taste.

When nitrofusion hit our shores a few years ago all the cool kids were using it as it was the ultimate blend of pea, rice and artichoke protein that provided the greatest amino-acid profile of any protein powder on the market. The problem was with the Australian distributors who seemed to hate the eastern side of Australia and refused to send any of the product to potential suppliers in Victoria. Eventually Uproar came to the rescue, providing an insanely cheap source for chocolate, mocha and berry flavoured nitrofusion. It tastes pretty good too. However, it does contain a few filler ingredients like sweeteners which may be problematic for people wanting to control their macronutrient intake.

This is the place to go for vegan protein powders. There are lots of them here. The only problem is that lots of them contain hemp protein and xylitol, which can both cause a problem at customs. Sunwarrior rice protein and a multitude of rice, pea and soy proteins are available from iherb. Take your pick. The prices are practically unbeatable at the moment thanks to the strength of the Australian dollar.

You can't look past this site either. It has a great range of proteins and prices comparable to other online stores. Best of all it is a fully vegan company that stocks heaps of great stuff that you can't find at other places and you know for sure that it's vegan unlike other sites that don't bother doing the research to confirm if products are really vegan.

A few years ago these played a big part in me getting stronger and also fatter, when I was sometimes eating three a day. They are more accurately described as chocolate bars with added protein as there are more carbs than protein. You can get these from uproar, Vegan Essentials and iherb.

If you are after an overpriced and disgusting protein bar that contains kooky, mumbo jumbo, ingredients (i.e. biodynamic foods) then this is the bar for you. If however you are after something that actually tastes nice, go with the builder's bar or make your own.

Veganfitness.net has a great thread with protein and energy bar recipes that you could try out. Vegan kettlebell guru, Mike Mahler, also has some cool recipes on his website for bars, cookies and shakes. Check them out.

If you'd like to calculate your protein and macronutrient intake, check out cron-o-meter and sites like nutrition data and the USDA nutrient database.

Well, that's all for part one. Let me know of any other protein bargains you have found or if you have any good protein bar and shake recipes. Now, off to the gym with you!